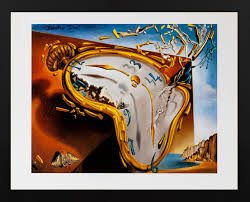 How difficult would it be to make a Dali clock? Which elements could be done from scratch and what's a reasonable jumping off point with premade prebuilt components?