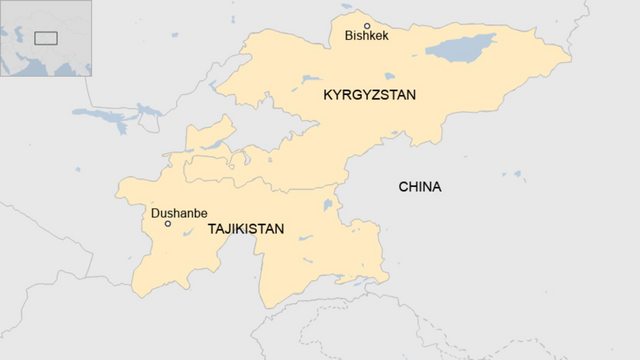 an evaluation of a potential military conflict between kyrgyzstan and tajikistan, and the weapons that both sides wield.

tajikistan has 9,500 active personnel, no reserves and a military budget of 79 million per year, while kyrgyzstan has 23,000 active personnel, 50,500 reserve personnel and a military budget of 240 million.
tajikistan's equipment is all of soviet make, generally from the 1950s and 1960s, with a small handful of 1970s and 1980s gear. their tank force consists almost entirely of 40-ish unmodernized T-62s, their primary infantry fighting vehicle is the unmodernized BMP-1, and all of their artillery is from 1964 or earlier, with their mortars being PM-38 soviet mortars from WW2.
kyrgyzstan's equipment is a mix of soviet, russian federation, and to a lesser extent, american and chinese. most of their equipment is from the 1970s 1980s and 2000s, their tank force consists almost entirely of 215 T-72s, their primary infantry fighting vehicles are modernized BMP-1s and Tigrs, and their artillery is similarly outdated to tajikistan, though it should be noted that they have more than three times as many howitzers, that they have field guns while tajikistan does not, that they have anti-aircraft guns while tajikistan does not, and that they have anti-tank missiles while tajikistan does not.
it should also be noted that tajikistan lacks any kind of LUV/MRAP, while kyrgyzstan operates 50 humvees and 65 dongfeng EQ2050s.

overall, both countries have terrible militaries, plagued by outdated hardware, corruption and poor training. however, kyrgyzstan has a far larger, better equipped, more versatile and better prepared military, and should this little border conflict escalate into a serious war, it would be very difficult for tajikistan to overcome this. with all this in mind, tajikistan's aggressive moves against kyrgyzstan along the border are hard to explain, but it will be interesting to see these ancient weapons systems in action.