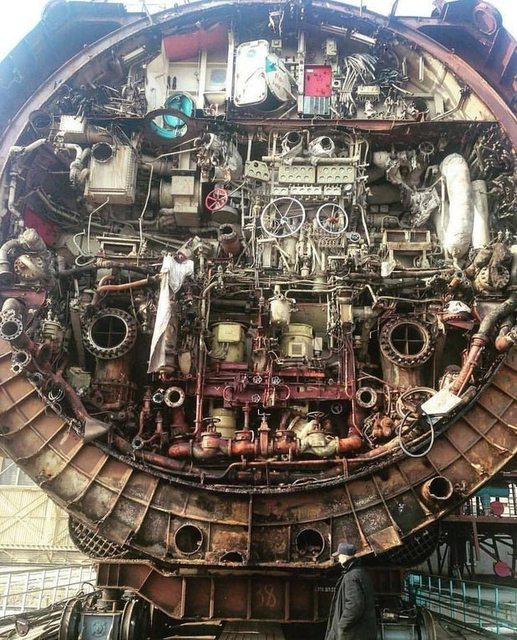 The steam lines supply steam to drive the propulsion turbine (which drives one propeller through reduction gears) and the turbogenerator (which generates electrical power).

The propshaft from the forward propulsion turbine can be seen poking through the bulkhead. Because the Project 667 submarines have two propellers and two turbines in different compartments, the propshafts have unequal lengths and the aft turbine is displaced slightly to starboard.

The steam from the turbines is exhausted into two condensers, which are tubes surrounding a pipe with cold seawater circulating through it. The steam condenses on the circulating water pipe, creating a vacuum inside the condenser. The circulating water can be driven by pumps or the natural flow created by scoops on the outside of the hull at higher speeds. The scoops and discharge vents can be seen here.

The condensed steam is pumped via condensate pumps (not shown) to the feedwater system, which pumps the water into the steam generators, where the heat of the reactor turns the feedwater back into steam. Visible in the photo are two backup feed pumps (the main feed pumps are further forward).