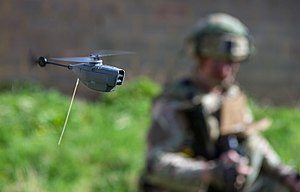 >swarm of these fuckers advances from enemy lines at a mix of altitudes
>AI identifies prioritizes targets and passes them into a queue
>automated guns and rockets shift seamlessly from target to target.
>smart munitions that can adjust their path come screaming out
>some are packed with EFPs, so they can come in at high velocities, changing trajectories to hit moving vehicles
>others have clusters of 40mm grenade sized munitions that can branch out and hit scattering infantry
>after firing, the minimally staffed battery components can pack themselves down and begin to scoot
>self driving supply carts guides by an AI priority queue continually feed new munitions where they are needed
>MLRS fire in rockets that disperse quad copter drones overhead that begin firing EFPs down on any target in sight, sharing information and swarming for effect

Even if the spotters can't get quite this small, its over, isn't it? Being infantry is going to be absolutely terrible in 20 years.

Even if you have lasers and interceptors and even a screen of drones to protect your airspace, war is just going to be about whose interception capabilities run out first, and then robots with full EM spectrum sensors at every angle are going to rape you with self guided munitions.