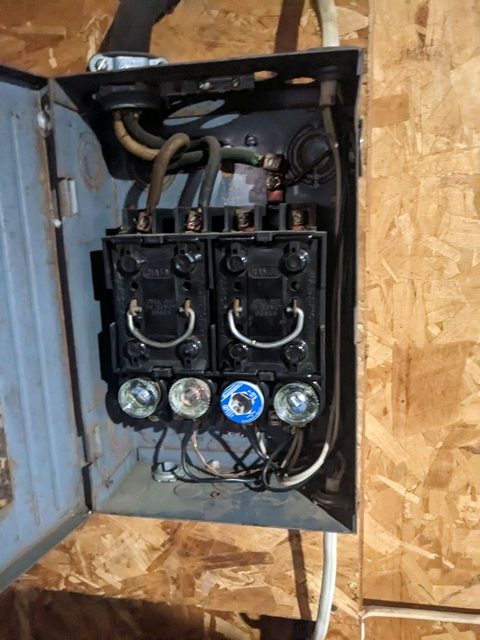 Bought a house this summer and this is the fuse box in my garage. I was not thinking the other day and ran my old table saw and an electric heater on the same circuit and popped one of the glass fuses. I replaced the blue 15 amp fuse that was visually blown but the outlet and entire circuit that I wanted to use was still dead. I pulled the main and range boxes and tested the continuity of the shotgun shell looking fuses and they all worked fine. I then took my tick tracer and saw that the red 20 amp glass fuse had no power to it, but the other three blue ones were fine. The red 20 amp fuse doesn't look blown like the one I replaced did.
I'm confused. I'm a low volt guy so I know a little, but not a lot about higher voltages.
1. What's going on here?
2. Can I pull these glass fuses and main/range boxes without walking back to my house and killing the power to my shop, or will I get zapped? I'm not super scared of 120, but I'd like to avoid it if possible.
3. The guy before me left a more modern used panel in the garage, seems like he intended to switch it out and never got to it. I have a buddy who is a licensed electrician but lives about an hour away, is this something I could safely swap out with some facetime help from my buddy?