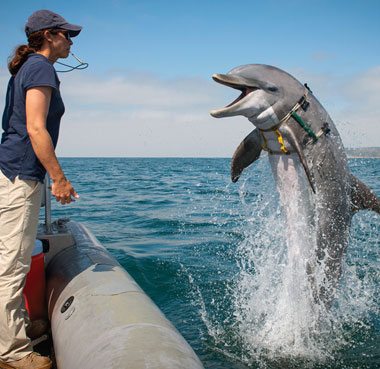 >https://www.rand.org/blog/2022/07/why-it-makes-sense-to-keep-mine-hunting-dolphins-on.html
> In the Navy's budget request for the coming fiscal year, funding for the dolphin team has been slashed by $6.6 million—to less than $1 million (PDF).
> To report the presence of mines to their human handlers, the dolphins are trained to tap paddles attached to a boat or dock, then are given devices to mark the mines' locations, enabling elimination of the threat.
> During exercises, dolphins almost always locate every mine assigned to them, in addition to previously undiscovered mines from World War II.
>Thanks to healthy diets, medical care and protection from predators, the dolphins frequently live decades beyond what they would in the wild.
>Eliminating the dolphin mine-hunting program would save the Navy $7 million annually. In contrast, the Navy has spent $131 million over the last three years to acquire 10 of the newest uncrewed undersea vehicles that would replace the dolphins—and that does not include operational costs.
>Rather than one system being viewed as a replacement for the other, the two can work together: The vehicles can sweep wider areas at lower levels of fidelity, and dolphins can provide focused capabilities in specific environments or when higher accuracy is needed