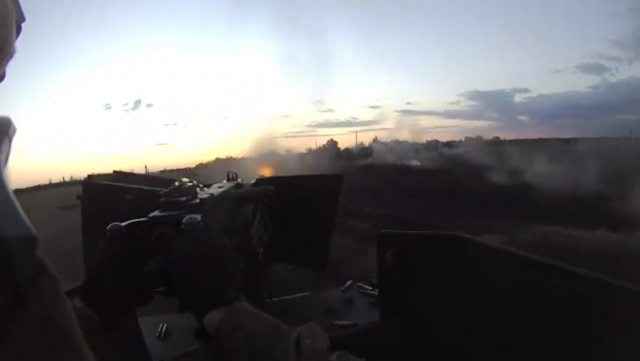 “We were going from newly liberated Ukrainian lines. We had captured some Russian positions earlier and the next stop was that village in the video. The house you see me engage almost immediately, had anti-tank weapons and anti-tank teams in it. My job was to suppress that house and allow the other vehicles to pull up to the village. That’s what I did until we got past that house. Then I started engaging the third house in the line of houses. You can see in the video there is small-arms fire coming from the house.

I speak Ukrainian. So, if I wanted ammo, I could ask for it in their language. But underneath the stress and pressure of that moment, things must have gotten confused. My crew had been trained that if I shout for ammo, or if I shout for anything while I am not shooting, they need to give me ammo. They passed me the AT4’s because during the mission briefing, there was supposed to be a BTR and a BMP inside the village and my job was to destroy the vehicle if it was spotted. That’s what he thought was going on, so he handed me the AT4.

I was originally going to throw down the second rocket, grab an ammo can instead and get the .50 back in the fight. But I wasn’t going to be able to reload the gun and traverse the turret because I was receiving fire from less than 50 yards away at the house. This guy was gunning for me. So I decided I was going to use the rocket and give this guy a bad day.”
- @nucking_futs_yuri Sept 8th, Ukraine.