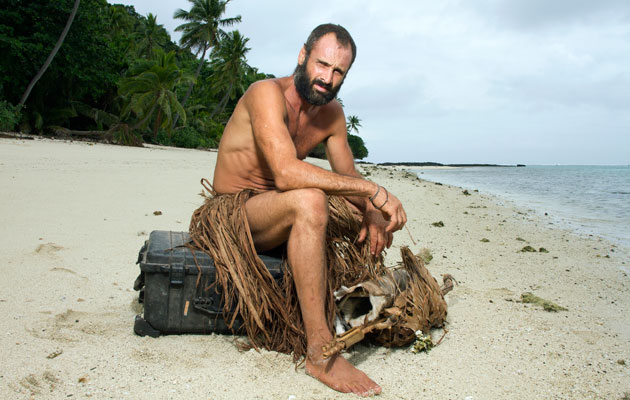 "It isn't about trying to survive on the bare minimum. It's about evolving and thriving." Ed Stafford is an ex-Army British explorer, who also happens to be the first man to walk the length of the Amazon river. His most recent adventure involved being dropped onto a beach with nothing but a camera and a smile for 60 whole days.

We caught up with him to hear his best tips from fire-starting to literally squeezing the shit out of geckos...

If you're washed up on a beach and you haven't got any shelter, one of the best things you can do is cover yourself in a surface layer of sand. It acts as a barrier to stop the wind chilling you. Unfortunately, the sand I used was a bit damp and took the body heat right out of me. That was a pretty miserable first night.

Clay makes for the best sunblock. Before I went on the island, I spent a bit of time with some Aboriginal friends of mine in Australia. To protect themselves from the sun, they literally just cake themselves in clay from the riverbed. So that's what I did and it's perfect.

To start a fire, I used the hand drill method. That's where you basically spin a stick between your hands into another stick on the floor. If you get it hot enough, it produces an ember.

Anything you can scavenge and eat raw is good. For the first few days, I ate raw snails and geckos. You catch the geckos, squeeze all the excrement out of them and just eat them whole. They taste horrible but, once you've eaten one, it's not so bad. 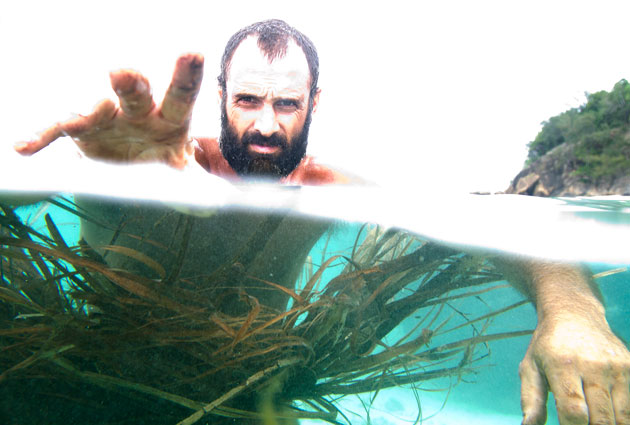 For water, all I had at first was a wet rock face and coconuts. It hadn't rained for a few weeks, so there wasn't much water around.

I had to put a bit of cordage against the rock and make a wick out of it, to encourage the water to come away from the rock. I'd found a load of plastic bottles on the island so used those to collect it. I'd get about one drip every 40 seconds.

I made quite a nice little house with a guttering system. I went into the forest interior and put a crossbeam in between two trees. I leant some other trees up against it and latched it all together with bark. Then I plaited some coconut palms for a thatched roof and split some bamboo into a half-pipe-style gutter to collect rainwater.

If this wasn't going to be on telly, I'd have felt quite at ease without clothing. However, as I didn't want Discovery to have to blur my bits out for three hours, I made a grass skirt from the bark from a beach hibiscus. It's the type of tree where you bang it with a stick and you just peel the bark off.

My biggest fear was of going a bit mad. My Aboriginal friends had told me, "Ed, don't underestimate the effect of isolation on the brain. It really is extreme."

One good trick is to make a little stone circle for yourself. Whenever you feel yourself starting to panic, just go and sit in the circle and you'll feel completely safe. And that's exactly what I did. You just take a deep breath and think, "Yeah, life's not so bad," and I wouldn't leave the circle until I felt calm again.