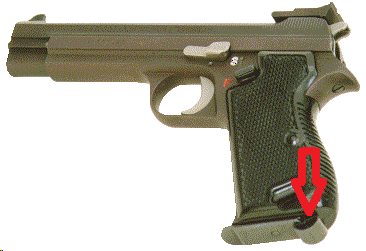 Having watched a lot of police shootout bodycam footage I can with full confidence say that the heel type magazine release should be the standard for most service pistols.

The detriment of the additional second it takes to swap mags is heavily outweighed by the detriment of magazines being dropped left right and center in actual stressful shootout situations. Think about it, magazines often drop at the worst possible time, right when you are trying to return fire, gripping the gun tightly because your life depends on it and accidentally depressing the magazine release, whereas reloading can be done in cover. Carrying lots of extra mags also seems advisable as it seems that half of those will be dropped to the ground when fumbling with reloads.

>just train more
If that were a feasible option don't you think it would have already happened? There's a budget to consider and covering for human inadequacy with technological design is a tale as old as time.