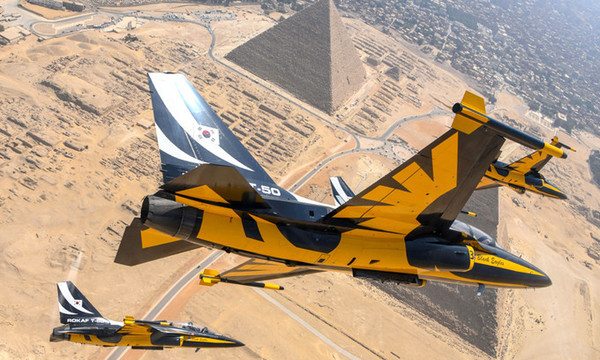 https://m.koreaherald.com/amp/view.php?ud=20220804000180
>CAIRO/SEOUL -- A group of the South Korean Air Force's T-50B jets streaked over Egyptian pyramids during an air show earlier this week, in the first such performance by a foreign military around the African nation's ancient structures.

>The South's Black Eagles aerobatic team staged the joint flyby with the Egyptian Air Force's Silver Stars team during the Pyramids Air Show 2022 in Giza on Wednesday (Cairo time), according to a pool report.

>To support South Korea's bid to export FA-50 light attack fighters to Egypt, the Korean Air Force and the Korea Aerospace Industries (KAI), the fighter's manufacturer, had worked together with Egypt's Air Force to arrange the flight. The FA-50 is the armed variant of the T-50 trainer jet.

>Some 1,000 people, including senior South Korean and Egyptian officials, attended the air show. Among them were Seoul's Ambassador to Cairo Hong Jin-wook and around 100 South Korean residents in Egypt.

This is pure fucking insanity lol. Why can't we stop winning FA-50 bros?