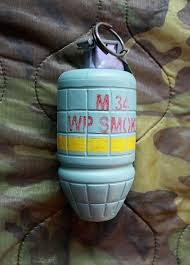 last year when we were all shocked by the amount of untouched armor and the vehicles abandoned by Russians, I talked with some Americans (from America) here, and some of them told me stories about their fathers being issued phosphorus grenades just in case they have to abandon the vehicle, so they can destroy it or make inoperable for the enemy.

Would you be so kind and refresh my memory? I remember it being a common practice during the Vietnam war, and that it was deployed during Gulf War, but what was it carried on later on?
Waren't phosphorus munitions banned later on?