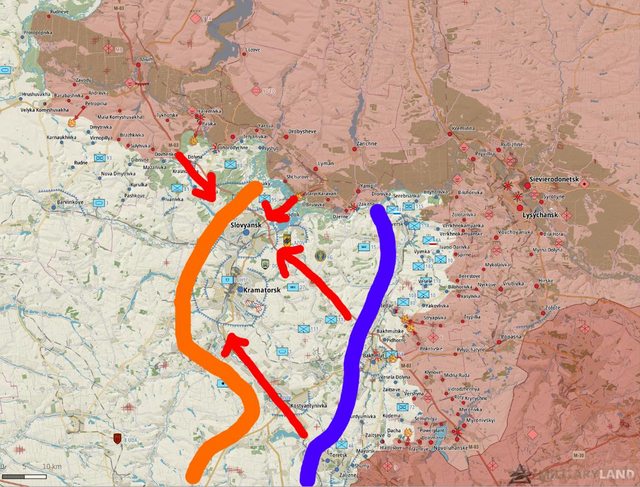 Since August 1st, Russian forces have been "attacking" the city of Bakhmut. I add the quotes because despite it being over 2 months since the offensive has begun, Russian forces still haven't reached the city proper.
But why, even as the Kharkiv, Luhansk, and Kherson fronts collapse, are the Russians still trying to take Bakhmut?
>Because its a major city!
It's not. I'll explain what Bakhmut is.
Bakhmut is the first step towards the actual goal of the Russian offensive, Slovyansk and Kramatorsk. Bakhmut is just one city on what we'll call the "Bakhmut-Soledar-Siversk Line."
After the fall of Sievierdonetsk-Lysychansk, the Russians had made it clear that they would be aiming to take the Donetsk cities of Kramatorsk and Slovyansk, the former being the provisional capital of the Oblast.
However, a Ukrainian defensive line was set up along the T-5 road going North through the blue line in picrel. Breaking that blue line was necessary to start the assault on the orange line, Kramatorsk-Slovyansk.
This assault would've been assisted by subsequent Russian attacks North of the city from Lyman and Izyum.
But over the past month, Russia has lost Lyman and Izyum, meaning any assault on Kramatorsk-Slovyansk will come from the east and only the east. The chances of this succeeding are basically nil. To take Lysychansk and Sievierdonetsk, the Russians had to flank from the south in Popasna and north from Kreminna.
So the attack plans for Kramatorsk and Slovyansk are over. They should be scrapped. And yet, the Russians attack Bakhmut anyways. They continue on with phase 1 of an offensive long dead.
Why? Well, did I ever tell you the definition of insanity?